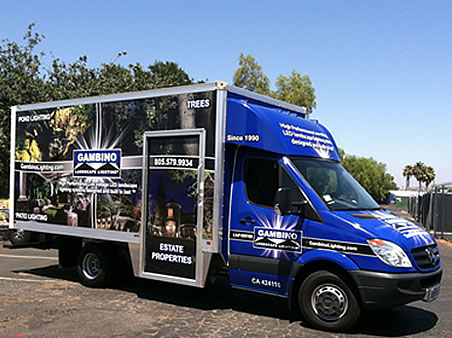 Mike Gambino, President of Gambino landscape lighting Inc. began his career working summers at a family friends landscaping business at the age of 13 on Long Island in the state of New York. It was there where he developed his natural talent for working with landscapes and realized he wanted a career working outdoors. By the age of 16 he had split off on his own and started his own landscaping business by knocking on doors and working out of his parents car. It wasn’t long before the business grew and afforded him the ability to purchase a truck, trailer and commercial quality equipment. The business grew even further through the end of high school and into the 4 years of university where he graduated with a degree in business administration from Adelphi University in Garden city, NY. in 2006. Working on Long Island was great nine months of the year but by the age of 25 Mike married his childhood sweetheart Denise and together they decided to make a new life together in California where Mike could work all year without having to seasonally shut the business down during winter months.

Before the big move Mike had investigated a burgeoning service related to the landscaping business-landscape lighting. The first few years in California were lean ones as this major relocation took place right in the middle of a major economic downturn in the early 90’s. Mike took a job with a landscaping company as a foreman which lasted for 11 months until Mike passed the California state contractors license test on his first attempt and was issued number 606109 under the landscape contractor license category.

Mike left the company on good terms determined to succeed and landed his first big major project which lasted for about three months working alone by himself. The clients raved about the lighting Mike had installed at the end of the project. He also found this aspect of the construction project most enjoyable and rewarding. After several similar scenarios playing out project after project it wasn’t until 1995 until Mike realized that lighting was his passion and would become his future.

He took another big risk announcing his business was now changing its name from Gambino Landscape to Gambino landscape Lighting in the spring of 95 and would no longer perform any aspect of a landscape project except landscape lighting on luxury properties.

Since the beginning every project has been designed and built by Mike. By 2008 the workload had become too much to handle for Mike alone and he hired his first two employees who are still with him today assisting him in the field. A third was added in 2010 but nothing has changed since the beginning as Mike is still on every project working along with his team. The company has been successful from the outset. The quality of the work coupled with the brilliance of each design has created an outstanding reputation. Gambino landscape lighting has won awards and Mike and his teams projects have been featured on the cover of and inside many landscape and architectural magazines.